Saturday morning was my fourth Dancercise session. It seems I can still get either my legs or my arms moving in time, never both. Despite that I am improving. Certainly I’m managing more of the high impact moves now, and feeling confident enough to sing along. Its doing me good at many levels.

After a shower and change my partner and I headed off across the Pennines for a night away, a much needed break. Our destination was chosen because I wanted to visit my dad’s memorial bench and the place we scattered his ashes.

I like to think I’m all scientific and logical, I know he isn’t really there. I believe he’s still alive in our hearts and memories more than in the place we left his physical remains, but science and logic can only get you so far. Sometimes I need to be in a place he loved, to take a few moments to be quiet and remember him, away from the busy, challenging turmoil of everyday life.

It’s changed, but everything changes. His bench had been revarnished and repositioned to face the meadow where his ashes were scattered.

The tree that used to stand in the meadow is long gone, but a darker patch of grass showed me where it had been, and closer examination revealed some remaining bits of tree stump. I felt a connection to how it had been when my dad knew it, despite the changes. The bee hives were busy, the sun shining, the gardens beautiful. It was evening and felt like summer. I was glad I’d gone.

We had dinner in a local pub. My tactic to try and eat healthily when eating out is to go for either fish or salad, and the red snapper was delicious, but the meal was considerably less healthy than it could have been due to the marvellous dessert! We had a long walk through the town, possibly confusing the folk outside the local pubs as we walked through the market square several times in an hour, from every possible direction.

The following morning we decided to set off early but stop and explore Kendal on the way back. Despite confusing signage (one signpost directed us down a back alley at the end of which was the river and no further directions!) we eventually reached the castle, glorious in the sunshine and well worth the climb up the hill. We could see for miles.

Home and back to reality. Dogs to walk, family to feed, all the everyday things to do. I didn’t want to spend a long time making tea, and after the indulgences of the weekend I definitely wanted it to be healthy. Our veg bag this week included cabbage, so I decided to have another go at this Garlicky White Beans and Greens Pasta recipe. Last time I tried it I hadn’t cut the greens small enough, so it had a slight raw cabbage vibe which wasnt exactly appealing. This time I was without beans, which I replaced with chickpeas, and rosemary, which I replaced with oregano (that and mint seem to be the only herbs flourishing in the garden at the moment.) It turned out well, definitely better than my last attempt and I’ll certainly be using the recipe again. 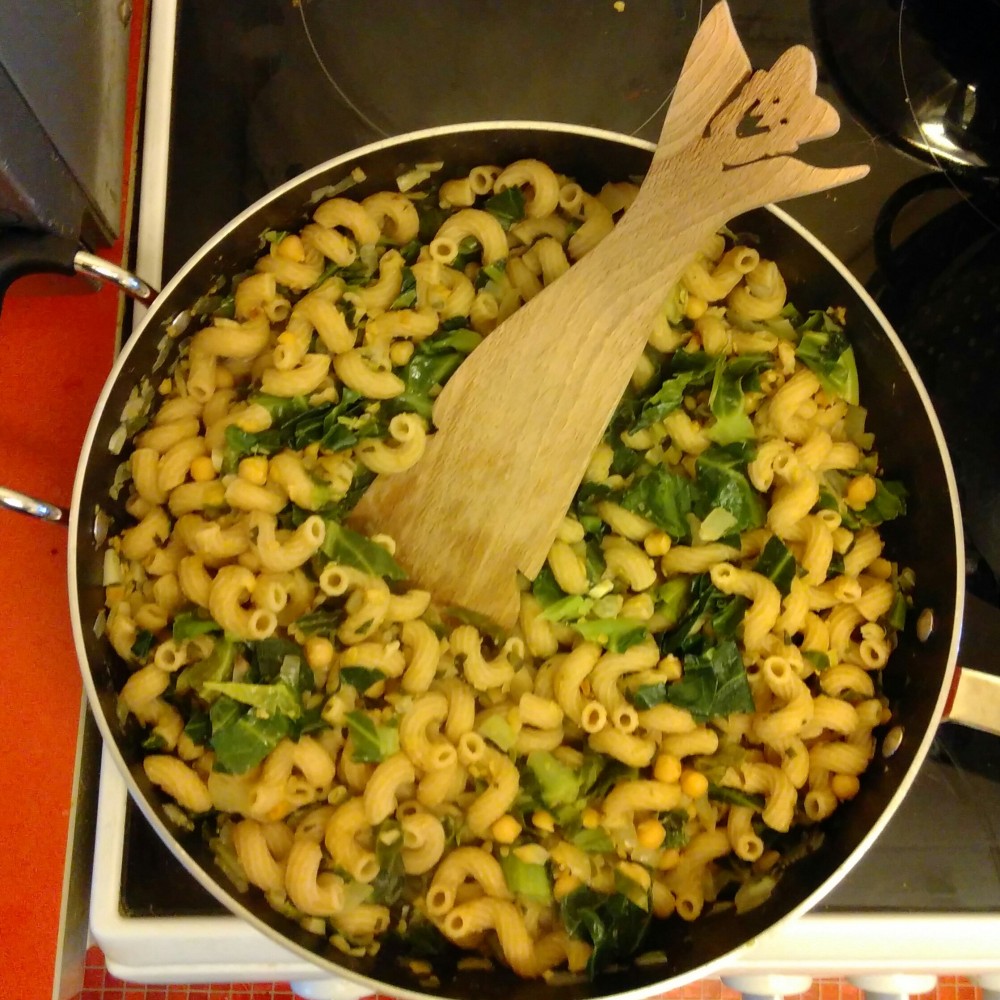 All in all a good weekend. If I could only have stopped my anxious mind worrying about the week ahead it would have been perfect. Howeve there were times over the weekend when my brain was still, and that’s an improvement on recent weeks, so I’ll take it.